We planned this trip for at least six months because this was a big celebration, “Dirty 30!” We wanted to do everything that The Sin City had to offer! I also wanted to make this trip the most memorable for my girlfriend, Porshia. So I decided to invite our friends to come along but it would be a surprise.

While the excitement built over the coming weeks prior to this trip, I was struggling not to have the beans spilled for the surprise. I had tshirts created as party favors for those who did come, I had us on the guest lists for parties, tours and even had a dinner planned. However life happens and not all of the plans came into fruition, but we definitely had a blast overall. Its also hard to surprise my girlfriend who has to have a hand in planning her birthday trip she wanted to prepurchase tickets to everything, not knowing it was just more than a party of two.

The day before the trip I got off work late while the same friends who were coming on the trip, decided to go out and bring in her birthday at a popular bar, The Ubar. She still had no idea that they were coming to Vegas for her.

The day of depature, we woke up really early to head to the airport. When we made it to the airport and through TSA we decided to have a quick breakfast where we went live on FaceBook. Her friends that were coming were commenting, wishing her a fun trip and telling her to enjoy herself. They were laying it on thick, like they were going to be back in GA waiting our return, little did she know they would be flying out hours later.

Once we arrived in Vegas we got our lyft, went to the hotel to check in and immediately started on our way to grab lunch, and go to the pool. We hit the ground running hard. I was finding all types of things to keep us busy to keep the momentum of when our friends would be arriving. I felt like we should have taken a nap but the excitement had us going like the energizer bunny. It came down to two hours prior to meeting up their flight was delayed at the gate. I had to stall her, so Porshia and I decided to go to Freemont Street. Freemont Street is the old Las Vegas with casinos the mafia use to run. Its full of old casino hotels, cheap liqour, cheap food, street artists and performers, and store fronts. They even have a stage for musical acts and a zip line called Slotzilla. We even decided to go the biggest dispensary in vegas, Planet 13. Man was that a site to see and experience!

Afterwards we went back to Freemont where I arranged for everyone to meet up for the surprise. Our friends finally made it even after their bags were delayed, they checked into their rooms and came straight to Freemont. When they arrived on the strip, I had to go find them while Porshia sat down to give her feet a break and she thought I went into a restaurant to use the restroom. I came around the corner following her friends and she screamed in excitement as she came to the realization that all her friends came to celebrate her birthday.

See the Surprise and our first night in vegas here!! 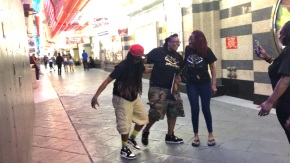 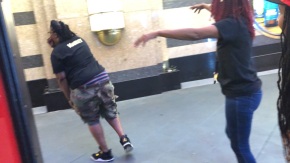 29 years old from Atlanta, GA. Works in the restaurant and hospitality industry with a niche for travel and other free spirited adventure! View all posts by Porshia